Imagine being unable to support your own head, unable to speak properly or eat without assistance. That is the reality for patients with MND; enabling the continuation of the most basic aspects of living such as being able to maintain eye contact with other people can dramatically improve quality of life.

Moya Briggs, 67, who was diagnosed with the less aggressive form of MND four years ago, chose to take part in a unique patient-led project, called ‘Head-Up’ to create a more suitable collar for patients with MND. 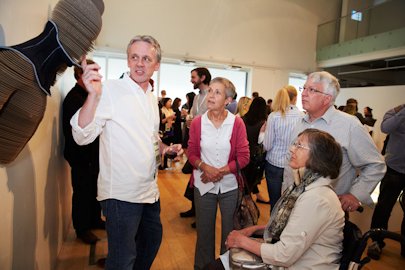 Moya said: “I hate the current collar I have to wear, absolutely hate it. When I’m wearing it I feel like an Egyptian mummy, all choked around my neck. For it to give me enough support I’ve got to have it really tight and when it’s tight I feel like I’m choking in it. It makes me feel as if I’m only partly communicating with the world.

“I hate the look of my current collar too and I cover it with a scarf. The fact that this new collar is inconspicuous and comfortable will make all the difference.”

The award-winning ‘Head-Up’ project is funded by the National Institute for Health Research (NIHR) Invention for Innovation (i4i) Programme. It is a collaboration between Sheffield Teaching Hospitals NHS Foundation Trust, Barnsley Hospital NHS Foundation Trust, the University of Sheffield and Sheffield Hallam University. The team was brought together and provided with early funding by the NIHR Devices for Dignity Healthcare Technology Co-operative (D4D HTC).

The collar came from a complete rethinking of existing collars as it sits low on the patient’s neck and offers support along the contours of the neck muscles, making it much easier for patients to carry out everyday tasks such as eating and communicating. The new collar will be undergoing a comprehensive evaluation later this year.

The involvement of patients and the public in research has been strongly promoted by NIHR, and is at the heart of D4D’s culture. Moya and other MND patients have played an extensive part in the design workshops for the new collar.

She said: “The whole device is very inconspicuous and provides so much more support. The snood itself feels like a second skin. It was wonderful for me because the muscles at the back of my neck usually feel the strain but I could instantly feel the relief in my neck.”

“I think it’s going to be a great relief to a lot of people. Every time I go out I will be wearing it and I need it for when I’m on the computer or if I’ve got to sit at the table or do anything for a long period of time.”

This group was supported by MND patients and carers through the Motor Neurone Disease Association. D4D is also leading the regulatory compliance, evaluation and commercialisation work to put the collar as quickly and effectively as possible into the hands of patients.

Moya said: “I think the role that initiatives such as the NIHR D4D HTC play is very important. They can add an extra dimension – bringing forward products which integrate modern materials and help make people feel more part of the community and less obviously disabled.”

The project was led by Dr Christopher McDermott, who is a Consultant Neurologist and a Co-Director at the Sheffield MND care centre and also supported by the Motor Neurone Disease Association (MNDA).

Clinicians, patients, academics and designers from across Europe have convened at Sheffield Hallam University to highlight the crucial role design plays in healthcare innovation.

Design4Health 2013, a week-long series of events hosted by Sheffield Hallam’s Lab4Living created a forum to discuss and develop designs and ideas to improve patient care. 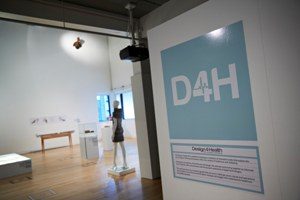 The week began with a high-pressure 24-hour design challenge, which pitted teams against each other to create a device or intervention which would assist in the transition of one of the case conditions, Motor Neurone Disease (MND) and Cystic Fibrosis (CF).

Within each of the four competing teams was someone living with or caring for someone with the case condition, working alongside two clinicians and a team of designers.

Ten countries were represented by the designers: South Korea, Portugal, Italy, France, Mexico, Poland, Argentina, Japan, Denmark and the UK.
The teams created prototypes with 3D printers and presented their concepts before a panel of judges from key healthcare organisations and charities, with two teams sharing an award for best concept.

Lab4Living is now working with the teams to take these concepts forward and seek funding for development.

The week also signalled the start of a major new exhibition featuring different health innovations including a suit made of mohair wool designed to react to individual body temperatures and an exhibit entitled ‘Head-Up’, which displayed a series of neck collars to assist patients with MND and neck muscle weakness. 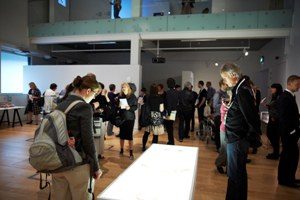 The main conference was attended by more than 100 delegates from 19 different countries.

David Pao, Clinical Lecturer and HIV Physician, Centre for Behavioural Medicine, UCL School of Pharmacy, who attended the conference and exhibition, said: “‘When I initially walked into the exhibition, I thought I had entered an art gallery. But as I spent time and looked more closely, I began to see real attention to detail, quality and a considered depth to the issues the exhibits were focusing on.

“The conference was the most uplifting, friendly and welcoming I have ever been to. At the same time, the presentations demonstrated the tangible value of the collaboration between design and health, and the potential to learn from each other, working and moving forward together.”

The conference organiser, Lab4Living, is an interdisciplinary research initiative, based at Sheffield Hallam’s Art and Design Research Centre which develops environments, products and creative strategies for future living in which people of all ages and abilities ‘not merely survive’ but are enabled and empowered to live with dignity, independence and fulfilment.

Joe Langley, Senior Research Fellow at Sheffield Hallam’s Lab4Living, said: “This year’s conference was a great platform for different groups of people to see the diverse range of content, methods and disciplines which exist when creating healthcare innovations.

“The exhibition provided a real, tangible focal point for many of the debates in the conference, creating provocations, case studies and examples which enhanced and livened the discussion.”

The next Design4Health Conference is planned for 2015.