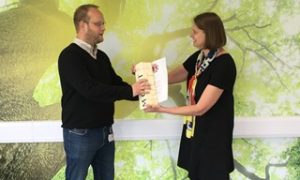 A wearable medical device that monitors kidney function and could reduce the time spent by transplant patients in hospital has won a prestigious innovation award.

IF Sensing has claimed the Merseyside Innovation Award (MIA) for April 2017. The company was founded in 2012 as a spin-out from Central Manchester University Teaching Hospital Trust and University of Manchester by D4D collaborator Professor Paul Brenchley and nephrologist Dr Sandip Mitra, D4D’s Renal Theme Lead, who brought in biosensor expert professor Tony Turner.

With development led by former pharmaceutical researcher Andrew Roberts, IF Sensing is currently working to refine the diagnostic technology which is believed to be a world first for home-testing kidney function. Using novel painless and bloodless extraction techniques, the device tests the clear fluid under the epidermis of the skin, instead of using needles to access blood.

It was created in response to clinical demand. Kidney-transplant patients spends many hours in hospital waiting for and having vital post-operative check-ups. It is hoped that the new device could reduce both time pressures affecting patients and cost implications for the NHS.

You can read the full press release here.

5 years of collaborative and innovative in silico research – Insigneo...