A Sheffield scientist who joined the NHS as an 18-year-old junior technologist has been named as the national Healthcare Scientist of the Year. 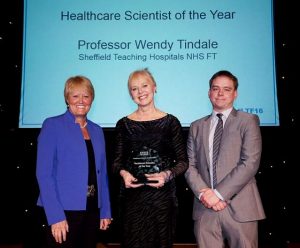 Professor Wendy Tindale, now the Scientific Director of Medical Imaging & Medical Physics at Sheffield Teaching Hospitals NHS Foundation Trust, has contributed to the development of many clinical science innovations that have improved frontline care during her career. Professor Tindale, who has an OBE for Services to Healthcare, is also the Clinical Director of the National Institute of Health Research Devices for Dignity Healthcare Technology Co-operative, which focusses on harnessing technology to improve patient dignity.

She received the accolade at the 2016 Chief Scientific Officer’s Awards in London. It recognises her as an exceptional individual, who has used her skills and scientific ability for maximum patient and service benefit, engaged and collaborated with wider professional groups and demonstrated the broad contribution that scientists make to the NHS.

She said: “I am delighted and humbled to receive this award, which is really for the great teams of healthcare scientists and other professionals that I have had the fortune to work with over many years.

“Operating at the forefront of science and innovation, their skills and expertise make such an important contribution to high quality patient care.”

Through her work with Devices for Dignity, she has been at the forefront of developing technology to help people with long term illnesses or disabilities manage their conditions with dignity and independence. Most recently, Devices for Dignity has collaborated with other teams to successfully develop a novel, supportive neck collar for people with Motor Neurone Disease and a digital bladder diary to help people with urinary incontinence manage their condition.

During her career she has also worked on projects including the design of artificial heart valves, where she gained her Doctorate degree, and the development of new scanning techniques for medical imaging. She led a successful bid, announced in January, for the Sheffield City Region to be recognised as a national ‘Test Bed’ for trialling new technologies to help patients to self-care. She has extensive experience in frontline patient care as well as healthcare innovation, and has successfully translated research findings into patient benefits. She has contributed to numerous national and international committees and published widely in scientific literature.