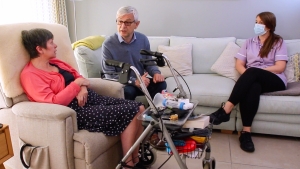 The Neurocare KnowHow team, including the University of Sheffield, NIHR Devices for Dignity, Ammba Digital and Optical Jukebox, have developed a pilot of the learning platform and would now like care workers to be involved in the testing phase to help the next stage of development.

This will help to ensure Neurocare KnowHow is designed the right way and with the right information for the people who will benefit.

We are testing Neurocare Knowhow during February 2022 and are asking for feedback on:

All care workers involved in testing will receive a high street shopping voucher to thank them for their participation.

To find out more watch our short film about Neurocare KnowHow

To get in touch to be involved in testing please email info@neurocareknowhow.co.uk or click here

This project has been funded by Ufi VocTech Trust, NIHR Sheffield Biomedical Research Centre and the Neurocare Charity.