You are here: Home / Case Studies / Next generation solutions in renal care without compromising on perfor...

Next generation solutions in renal care without compromising on performance

The NIHR has supported Quanta Dialysis Technologies in the development of SC+, a high performance, compact, easy-to-use haemodialysis system designed to improve the lives of patients and carers both in the clinic and the home. 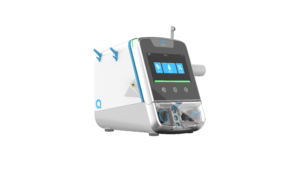 When did project start?

Patients diagnosed with end stage renal disease require dialysis to keep them alive. However, treatment can also have an adverse impact on their quality of life. Visits to a dialysis centre typically take about four hours plus travel time, three times a week. In addition, changes to the body caused by dialysis often leave people feeling “washed out”, which further impacts their ability to conduct a normal life. People who require regular haemodialysis are heavily constrained and forced to live their lives around their dialysis sessions, which has implications on their ability to work, go on holiday or take part in normal day-to-day activities.

Dialysis is also a huge burden on the healthcare system, costing the NHS over £505 million each year, with individual haemodialysis patient costs being over £24,000. Approximately two per cent of NHS budgets are used for the treatment of end stage renal disease patients. Dialysis is one of the largest global healthcare markets, worth approximately $73 billion per annum. In the UK, staffing and nursing costs make up around 60 per cent of the total direct cost. As patient numbers continue to grow, capacity in dialysis centres will need to increase, requiring more equipment, more space, more nurses, more doctors and more technicians. The alternative is home haemodialysis, which has been shown to lead to improved quality of life and survival rates. NICE first promoted the benefits of home haemodialysis over ten years ago by estimating that 15 per cent of patients could be on home haemodialysis and by requiring that patients be offered this choice. However, uptake remains low, partly due to limitations with existing haemodialysis systems.

The NIHR has helped catalyse a move to higher levels of home haemodialysis adoption by providing early Invention for Innovation (i4i) funding which has helped Quanta to fill this innovation void, with clinical support provided through a partnership with NIHR. Quanta’s SC+ is a high performance, compact haemodialysis system that supports patients across the continuum of care, from the clinic to the home, by making it possible for patients to operate the device and manage their therapy themselves. SC+ does not compromise on performance, as it offers clinical efficacy comparable to conventional devices and is compatible with traditional treatment regimens used in dialysis centres.

Through partnership with D4D, Quanta has worked closely with clinicians and patients during the development of SC+, with D4D providing funding at an early stage, and ongoing clinical expertise throughout. The technology behind SC+ is based on an innovative and unique design that incorporates the accurate fluid management required for dialysis on to a single-use, disposable cartridge. This cartridge-based design is intended to reduce downtime between treatments, simplify treatment complexity and reduce the risk of contamination.

SC+ is CE Marked and Quanta has successfully piloted SC+ at a number of NHS dialysis centres across the UK and France. Human factors testing has also been undertaken, which has shown that SC+ is easy for patients and professionals to use even with minimal training, and offers a high level of patient safety.

In order to make an impact, innovation must provide tangible advantages to users while also being affordable for a healthcare system. SC+ is compact and easy to use. In the clinic, it will require less supervision, freeing up the time of nurses. When used by patients at home, it is expected to reduce the cost to the NHS. Dialysis patients often require more than just haemodialysis treatment; for example, they also need transport, care and medication. By allowing patients to dialyse more frequently in self-care units or at home, SC+ can improve outcomes and reduce hospital visits, which will ultimately reduce costs.

SC+ was designed and developed by Quanta with investment from the NIHR, NBGI Ventures, Wellington Partners, Seroba, b-to-v Partners, ALIAD, Seventure Partners, Kuwait Life Sciences Company and IMI plc. A total of £45 million has been raised to develop SC+ through regulatory approval and launch.

Should catheter leg bag drainage tubes be made narrower?
Scroll to top